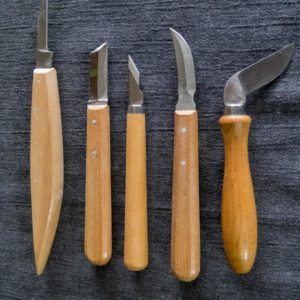 Chip knives are included here because their edge shape is more similar to knives than to the general line of carving tools. Of some ten different kinds of chip knives commonly available, about half are actually chisels rather than knives—relatively small chisels, but chisels nonetheless. The bevels on these can be treated exactly the same way you would treat the bevels on a chisel, leaving them straight and intersecting at whatever chosen angle you desire.

For the styles that are actually knives, the bevel almost inevitably requires a slight rounding in order to give the edge adequate strength and to allow you to change direction while cutting. In practice, all the chisel-like knives are used for stab cuts or straight lines. The rest are used for curvilinear work. Unless abused, these knives almost never need regrinding. All the work that is necessary can be done on a water stone, a bit of 600x silicon-carbon paper glued to a board, and a leather or wood strop with chromium-oxide (green) honing compound on it.

Any basic shaping can be done on 800x to 1200x water stones. This can be followed by stropping the edge either on a hard leather strop with green honing compound or a simple piece of softwood with the same compound on it. For convenience sake, it is useful to have a small piece of wood approximately 1 in. x 6in. with 600x silicon-carbide paper on one side for thinning out the knife edge after repeated stroppings and a leather strop (charged with chromium oxide) on the other. While carving, it would be typical that the knife would be used for several minutes and then given very light stropping. After this has been repeated a half-dozen times, you might then thin the edge with several trailing cuts on the 600x silicon carbide. Alternating between these two should keep the knife in perfect condition.

DISPOSABLE-BLADE KNIVES
Knives with disposable blades can be sharpened in exactly the same manner as chip knives. The blades may be disposable, but there is no reason that they should not be repeatedly honed to get maximum life from then. As with chip knives, regrinding is unnecessary, and all the maintenance of the blade edge can be done with 600x silicon carbide and a chromium-oxide strop.