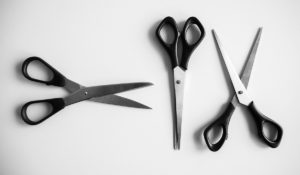 Over time and with consistent use, all scissors will eventually dull and loose the sharp edges they once possessed when you first bought them. If you are having trouble cutting with dull scissors, you might consider going out and buying another pair, since scissors are relatively inexpensive. However, there are several ways you can sharpen your scissors at home that only require a few common household items, and a little bit of practice.

Top-quality scissors and shears should be sharpened professionally; sewing centers frequently provide the service. But for the under $10 variety, the kind most of us have in our shops, there is no reason not to have a go at them. With a bit of care, you can do a perfectly serviceable job.

Scissors are most easily sharpened on a belt sander. With the table set at whatever bevel angle was originally on the scissors and the scissors open, grind one side, then the other, always with the belt running into the edge. Usually a single pass on a 120x belt will do it. After grinding, very carefully deburr the edge by taking a light pass on a fine stone (1000x or finer) with the flat of the blade.

Scissors usually dull as a result of the blades abrading each other; the material being cut is usually the lesser cause. As the blades pass each other they wear off a tiny amount each time. In the drawing above, the blades would have to be ground back to the dotted line to be restored. In general, you can regrind scissors at the found bevel angle, but this should not be less than 45° for utility use. For cutting very thin materials, a narrow flat on the edge is sometimes used.